The Canadian Romantic in Toronto 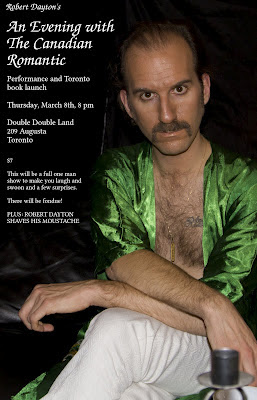 After taking this show to delighted and almost sated crowds in Montreal, Vancouver, and Saskatoon, at last it arrives in Toronto...
This will be a full one man show to make you laugh and swoon and a few surprises.

There will be fondue!

PLUS: ROBERT DAYTON SHAVES HIS MOUSTACHE

Robert Dayton’s most recent project is his series of videos and performances as the persona of The Canadian Romantic, a melodramatic figure of faded glamour who tries to bridge and explore the gap between Canada and romance with somewhat dubious results. Some key Canadian Romantic videos will be played. The Canadian Romantic himself will be performing live, taking topic suggestions from the crowd for his infamous impromptu candlelight Recitations. Expect glittery Bon Mots aplenty from a man of way too much experience. You will come alive with laughter feeling like you’ve woken up at an undisclosed time with make up smeared across your face.

This also marks the Toronto book launch of The Canadian Romantic, a book by the artist Robert Dayton consisting of tenderly hand-drawn pen-and-ink illustrations and elaborate musings by the artist and his alter ego, published by PITT Projects/Publication Studio, available for sale at the event. Special silk-screened dolls of The Canadian Romantic will also be for sale.


Special guest appearance by Chris Locke as The Mailman.


Afterwards Robert Dayton will shave his moustache for the first time since a brief respite before the millennium, he has had his moustache for almost twenty years, it's older than him, he will ask aloud if such things define him while wondering about the effect of shifting cultural meanings.

Robert Dayton is a multidisciplinary entertainer, writer, and artist from British Columbia who resides for the moment in Toronto. His work has appeared in numerous periodicals, the odd book, some zines (he's an old zinester). He is in such curious musical acts as Canned Hamm, July Fourth Toilet (Canada's wildest and most unpredictable band ever), Hallmark, and his current Toronto based rock band WET DIRT, as well as acting in a bunch of stuff.


Videos:
http://www.youtube.com/TheCanadianRomantic
Posted by Robert Dayton, Junior at 7:34 AM 3 comments:

ROBERT DAYTON in CAROUSEL 28 Do you know the work of Robert Dayton?

Posted by Robert Dayton, Junior at 1:08 PM No comments:

Nice little write-up, comments section proves amusing ("...Dayton is too old to be a hipster"):
http://scoutmagazine.ca/2012/02/26/soundtracking-campaign-underway-for-vinyl-pressings-of-points-gray-recordings/#comments
Posted by Robert Dayton, Junior at 12:59 PM No comments:

Soooo I am VERY excited as we are currently undergoing a campaign to get the Points Gray album by Robert Dayton, Dan Bejar, and Julian Lawrence released.
If interested, please click on the link below for more info and to pledge and if you could share it with and pass it on to any potentially interested parties that would be truly appreciated. Thirty dollars gets you the actual album and there are plenty mor eperks:
http://www.indiegogo.com/PointsGray

This is a moody distinctive album from around the turn of the century that has never gained full, proper release before. It's an album that the three of us are quite proud of and want to find its' audience. With this LP Robert, who is also a visual artist,has designed a brand new cover, it will come with a lyric and art booklet, and it will finally receive quality mastering done by Josh Stevenson who had previously mastered such things as a Destroyer reissue and the second July Fourth Toilet album as well as recording such acts as Sex Church. With liner notes by music writer and archivist Kevin "Sipreano" Howes. 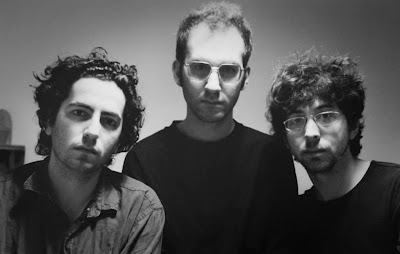 Posted by Robert Dayton, Junior at 1:14 PM No comments:

I have some of my Fantasy Beard drawings printed in the latest issue of Carousel Magazine, a gorgeous multi-media arts mag that I love to smell (dense ink) and hold:
http://www.carouselmagazine.ca/current.html

Posted by Robert Dayton, Junior at 8:01 AM No comments: