I have a huge Sweet daddy Siki (wrestler/country artist) interview in the new Roctober and you can even see him hanging out on the cover with Neil Hamburger, Tiny Tim and the Chipmunks (I also wrote some Chipmunks updates). As well July Fourth Toilet/Points Gray bandmate Julian Lawrence has a comic about getting turned on to K-Tel's Nutty Numbers. From the description: "A massive issue from Roctober this time around – filled with a wealth of information on unusual novelty and comedy records – plus lots of other odd vinyl too! There's a huge amount of interviews here – with Jimmy Lynch The Funky Tram, Mr Lee, Neil Hamburger, Dave Alvin, Dr Demento, The 1985 Chicago Beras, Rappin Duke, and others – plus bits on Richard Pyror, Pedro Bell, Brother Dave Gardner, Andy Kaufman, and Jack White's Third Man Records – plus a massive stand up records discography, and loads lots more! Massive reviews and other bits too – and easily the best musical bang for your magazine buck."
Order here:
https://www.dustygroove.com/item/671689 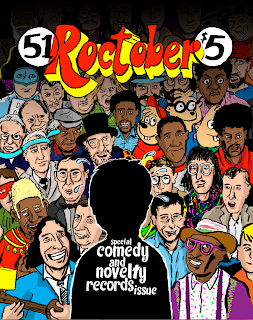 originally recorded in 1999 but not released until now “off Shore” by Vancouver based Points Gray, although they played live as AIDS, has an undeniable power in its lo-fi Folk Noire ramblings. A voice all its own that will either enthral you or grate with you, I can't imagine much in between. Personally, it has a taken a couple of plays before my ear tuned in, but I am glad it did, as songs such “Echo Power” and “People  Hate You In This Town” contain the same sardonic lyricism as The Velvets whilst being oddly constructed in a Syd Barrett, Skip Spence kinda way. Featuring future members of Wet Dirt, July 4th Toilet, and The New pornographers, the music is acoustic, rea

sonably free-form and is more uneasy than easy listening, although there are hidden depths to be discovered, pockets of beauty and a strange sense of stillness at its core. Limited to 300 copies, with a hand-drawn lyric booklet plenty of information on the cover, this is an excellent package that preserves a little slice of musical history.
Posted by Robert Dayton, Junior at 9:47 AM No comments: Links to this post

The Innocence of Childhood And The Vulnerability Of Mortality

New The Canadian Romantic video:
Posted by Robert Dayton, Junior at 8:24 AM No comments: Links to this post 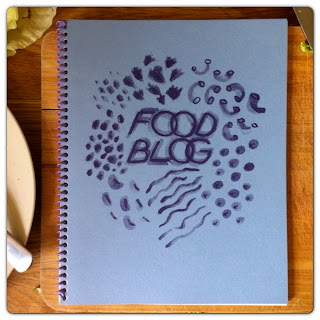 I have a recipe that details some memories of my Mother in this delightful Food Blog book put together by Anna May Henry. Info on the book and how to order here:

http://foodblog.bigcartel.com/product/food-blog
Posted by Robert Dayton, Junior at 9:16 AM No comments: Links to this post

Seeing The New Pornographers at CNE on Saturday brought back serious memories, a whole lot of 'Oh yeahhhh, I forgot about that!' including  this funny video where we were all puppeteers for the band, excuse my ill-advised beard flirtation.....I also ate some deep fried coca cola. Afterwards John Collins and I discussed the amazing qualities of the underdocumented 90s Vancouver music scene (ie. an insanely  pivotal 3 Day Stubble/Evaporators gig from 1992, I made the flier and probably have it wayyy deep in a dresser drawer somewhere) that stretched into the 2000s, damn, gets me thinking, hmmmm.

Posted by Robert Dayton, Junior at 9:06 AM No comments: Links to this post 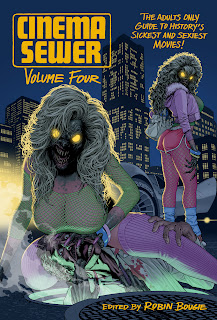 Hey folks, I have a tiddly bit of writing and some drawings in this book on the movies GET EVEN and SATAN KILLER! I get pretty writerly and freewheeling about those flicks, crotchpot full o' jokes. This book is jam packed! Robin Bougie does it again!
Order:
http://cinemasewer.ecrater.com/p/18249315/cinema-sewer-book-4-free-custom

Posted by Robert Dayton, Junior at 8:59 AM No comments: Links to this post

I finally put the entire WET DIRT album up on Bandcamp, so now it's even easier to listen to it/download....this was my first Toronto band...

Coming across like an early seventies, slightly-fried, band of freaks, the rather excellent Wet Dirt sound suitably messed up on their album “Self Sabotage, The Early Years” with the stoned groove of “Bad Choices” setting out their stall with the chorus “Bad choices, made some bad choices, gonna make some more”. Add to this fine guitar playing, a solid rhythm section,and an ear for melody, and you have a perfect opening song and statement. Moving on, “The Chill Out Man” is weird and creepy, nonsensical word play, and a crawling guitar line creating a strange atmosphere, the song sounding like something Zappa could have created. As the album progresses the band get weirder, louder, more interesting by turns with “Hot Pink” managing all three at once. Elsewhere, “Invalids” is post-punk noise, angular guitar and an individual vocal delivery adding to the tension of the lyrics reminding me of Pere Ubu, whilst “Of Felt” is a song about the tactile pleasures of felt, as it should be. If you are searching for something different, energetic, angry and weird then this should hit the spot, a minor classic. (www.inyrdisk.com)
-Terrascope 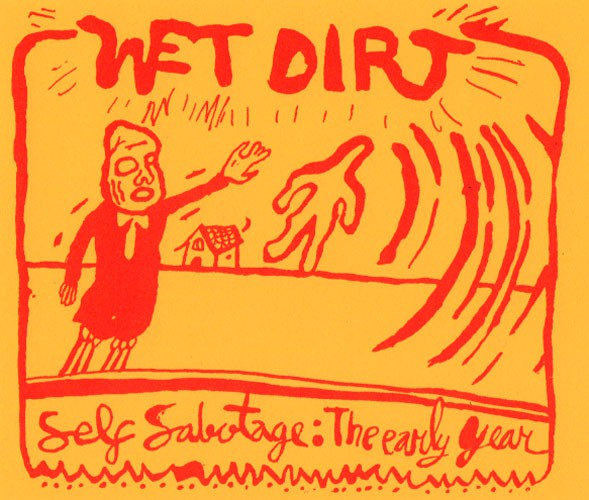 Here's the link to the art and lyric booklet that I made, too:
http://robertdayton.tumblr.com/post/57023214644/wetdirttheband-wet-dirt-cd-art-and-lyric

Posted by Robert Dayton, Junior at 12:52 PM No comments: Links to this post