The destruction of many Points Gray albums 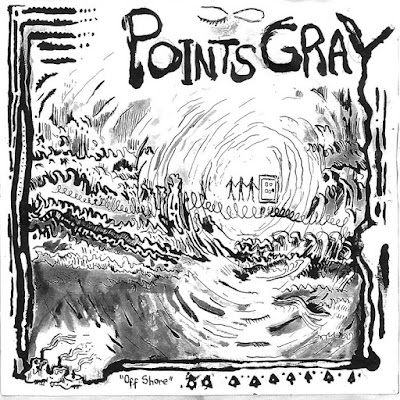 When I get an idea or get immersed in the act of creation I feel a rush of excitement, especially when sharing is involved, be it collaboration or even reaching out to people (which can also be a form of collaboration). Making art can be so spiritual, so divine, a curious lifting to get outside of or higher than oneself.  In 1999 I suggested to Dan Bejar that it’d be neat to do some psychedelic folk cuz no one else was doing it and we deeply loved Skip Spence and Holy Modal Rounders and on and on, even Smiley Smile and Henske/Yester fit the bill for us as weighty influences. I had all these intense, heavy gut-wrenching lyrics that I wanted to get out (even though I had a sense of humour about them),  so the project would be acid downer folk. Julian Lawrence came along for the ride to add some great musical flourishes as well. The creative process came about so easily, it was incredible. We recorded an album at Method, being 'folky music' it took no time even with the curious effects that we wanted to add, and I started pitching it to numerous labels of varying sizes. No bites. 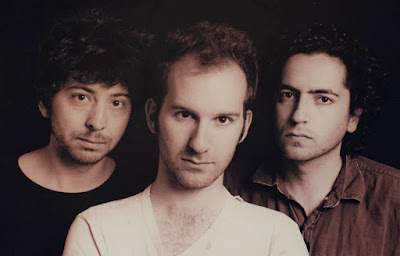 A couple or three years after our recording psychedelic folk went through a revival however labels said that we were ‘good but weird’ (as labels would tell me oh so often about oh so many things) …too weird for the psychedelic folk revival even. I don't go into a project thinking, "Let's make this weird so that there will be no audience." I usually regard the audience highly, that audiences want something different that speaks to them about the human (and beyond) experience, that they aren't zombies (are zombies still popular?)...I have mixed feelings about the word 'weird.' When I'd find, say, an old horror comic book called 'Weird' I am interested and intrigued because it probably won't be 'boring' but when the word is placed on me disparagingly I sometimes consider the source and think that maybe they want 'boring' or 'safe.' Is it really so simple? Does 'safe' sell?

Also we weren’t technically ‘active’ (one show only in 1999 and that's it) no bites…hey, the music industry is dying, labels want bands that are going to tour, that's the reality. But still I’ve pitched a lot of stuff over the years, I get things done and try to make it good (I do not want to add to the forgettable dung-heap, I may as well just be working in an office instead of creating boring work that has no depth -by the way, I am writing this in an office) but no bites. Finally in 2013 I decided to do it myself …yet again.  Always DIY, DIY has sucked me dry, I've done it so much and I don't want to do it again, I've tried and I've tried and I can't make it alone, I hit the ceiling of my own reach. Soooo crowd-sourcing! Crowd-sourcing is a bit embarrassing, even when one treats it like a pre-order the infrastructure of crowd-sourcing platforms set it up to seem like begging ("Won't you please help so and so to make their dream a reality?") With the crowd-sourcing I basically made the money back, though reviews were few if any, next to none (the industry has changed so much, now one has to hire a publicist to get any ink)…Couldn't I have just put it online to get lost in the hallowed halls of the internet? I am a record collector and clearly I am attached to the physical object. Is it really more real, more legit, because it is a record? Isn't manufacturing a  record somewhat wasteful? Attachment can be a killer. Maybe that's what's at issue here, maybe that is the source of these very long-term frustrations: attachment. Certainly letting go of things is healthy. My next therapy appointment is in three weeks, I'll keep you posted.

I got my MFA (Masters of Fine Arts, the air of legitimacy) this year and left the hallowed halls to yet again pitch and hustle to the response of silence and/or rejection. Waves of frustration hit me again. I was back in Toronto in a house with fleas and a few housemates including a shirtless noodle slurper (which terrified me from bringing dates over), perhaps mercifully it wasn’t long before we were 'renovicted' (as a blessing in the midst of my jobless perpetual wall hitting the land-lord let us live rent free for the final months). When it came time to leave I had to move so many heavy records including the unsold copies of the Points Gray LP. The perils of a record collector become known come moving day.


How to make the physical album be as precious as it sounds? How to try to tear down these walls that block me (I am not blocked creatively -I must assure and be grateful for that, it is a blockage in getting it to the people and I am grateful for the people, I am grateful for the people that I care about, I am grateful when I reach and impact people) that may be outside of my control? How to let go of attachments? How to heft around less albums and downsize? Destroy 100 copies. But first I wanted to trade some copies to anyone who was interested in the days leading up to the destruction for the small sum of dark chocolate and the odd subway token. This felt more like a magick ritual and much less selfish. People that I did not know seemed genuinely excited to get a record. I am unsure how they feel now that they have listened to it. I destroyed the albums myself in the back alley of my new home. Perhaps doing it alone made it seem truly more 'self-important' in that the importance was minimized (yet here I am writing about it and sharing the experience) while texting close pals like Kevin Howes, who wrote the liner notes, and texted back images of one of his own record destroying moments. Then, as a method of cleansing, I burnt some sage (apparently sage actually does cleanse, not just spiritually but physically, too) and threw them in the recycle bin. That this is such an emotionally heavy album where some of the songs were pretty perfect for Halloween, which had just passed, made it all seem right. I well and truly hope that it was a positive act and I can move forward with my current and future projects. There's still a few copies out there by the way, it isn't so 'diiiiire' you can order it here:
http://www.tediumhouse.com/artists/points-gray 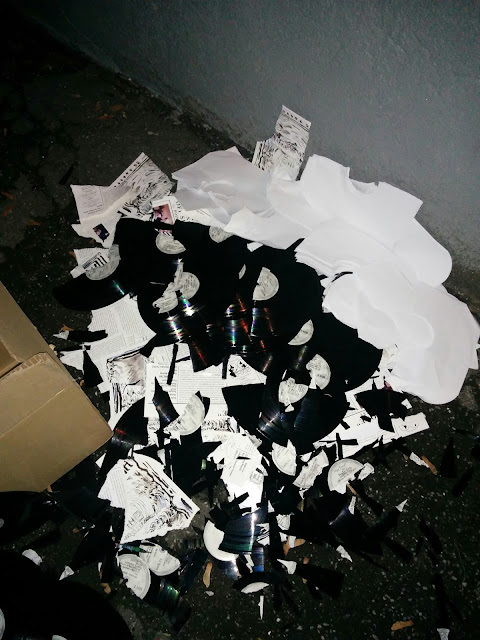 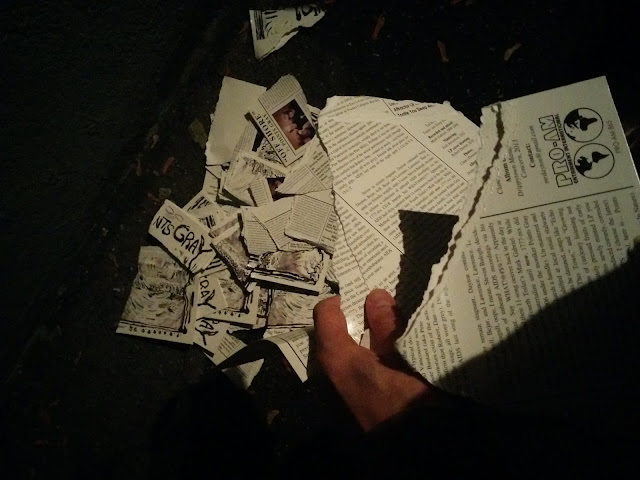 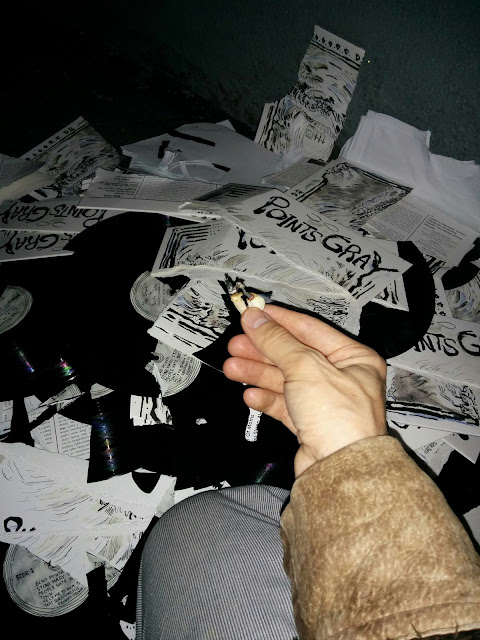 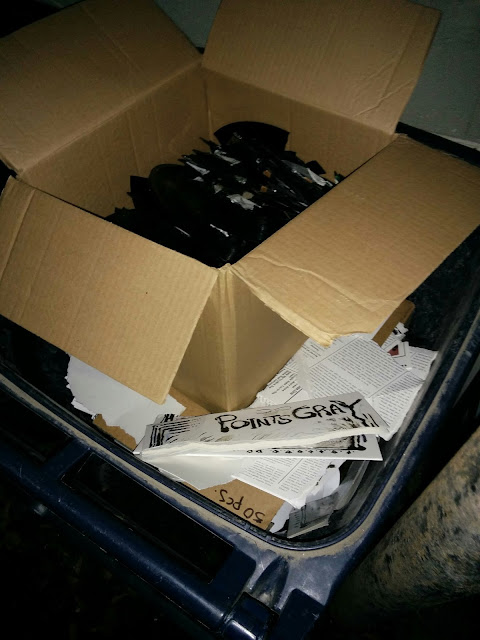