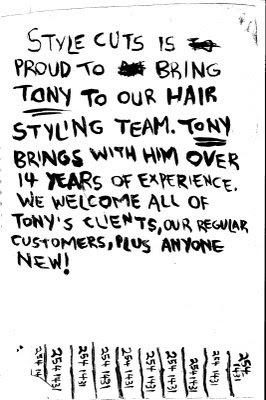 See previous post for details on how you can win nothing!
This particular Classified was used as the basis of verse two of "Armwrestle John" on "July Fourth Toilet Presents Balls Boogie featuring Me And Bobby McGee Plus!: Kentucky whore And many others!" vinyl LP, you'd probably like to know more about that record, huh? let me know and I will tell you all about it!
Posted by Robert Dayton, Junior at 10:02 AM No comments: 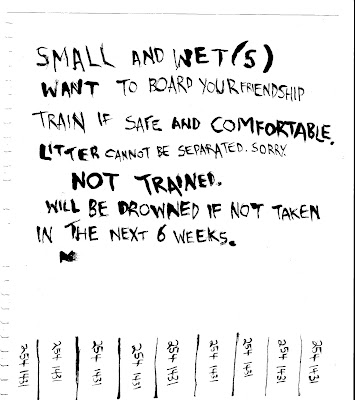 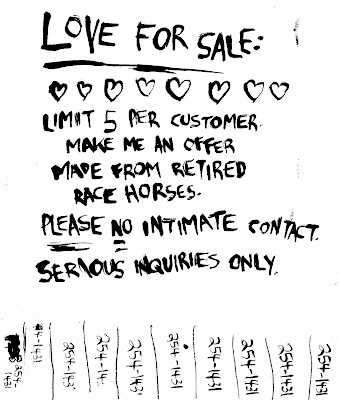 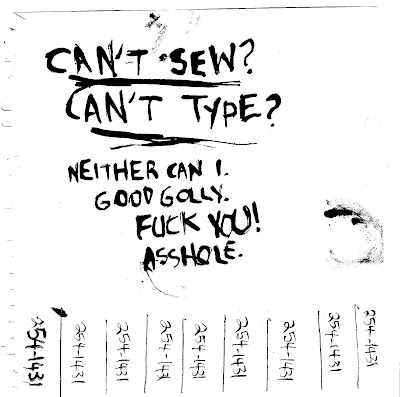 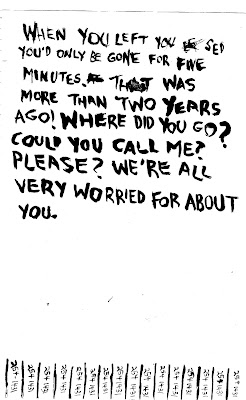 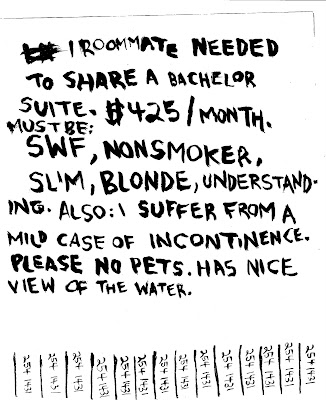 I was gonna post some nice recent images but my scanner's acting stooopid! STOOOPID!!!!
So here's some oldies, circa 1996. I should print these one day. Or better yet get some wealthy patron to print them. CALLING ALL WEALTHY PATRONS!!!!
I may have put a couple of these ads in laundromats to no response. Perhaps now that I have a real blog on a web that goes world-wide there will be wide response from WEALTHY ART PATRONS! It's on the net so everyone in the world reads it, right? Next they will go on my Twitter right after my post that reads, "Having a dump right now."

Enjoy.
Posted by Robert Dayton, Junior at 9:45 AM No comments:

I just wrote an appreciation of under-rated artist Bruno Premiani for the Guttersnipe website.
Read it here:
http://guttersnipemedia.wordpress.com/
Posted by Robert Dayton, Junior at 5:46 PM No comments:

Yes, some of this work posted on this site is still for sale. Grab it fast.
Yes, I am available for paid commissions.
Yes, I am very personable.
Yes.

Lately I have been returning to the zine form and have so far made a trilogy of self-help art booklets for a new society entitled Y2K Compatible. Because I am trying to effectively help and communicate with the reader I have kept the prices deliberately low: less than 2 dollars. This is not a profit making endeavour but a matter of making the new world a better place. I offer up SYMBOLS FOR A NEW ERA, NEW FRIENDS, NEW FONTS,NEWER GODS, ETCETERA...

It is available for mail order from here:
http://shop.lepressier.com/collections/y2k-compatible

In Toronto one can purchase them at:
This Ain't the Rosedale Library
The Beguiling (it is kind of difficult to find amidst all the other booklets so I recommend getting a staff member to find it for you)
Katharine Mulherin Gallery 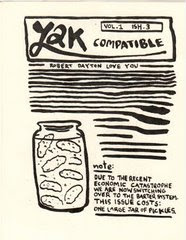 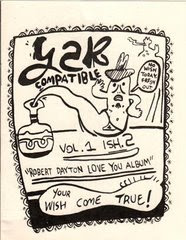 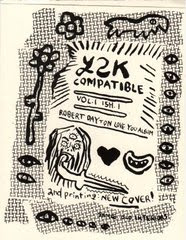 Posted by Robert Dayton, Junior at 8:16 AM No comments: 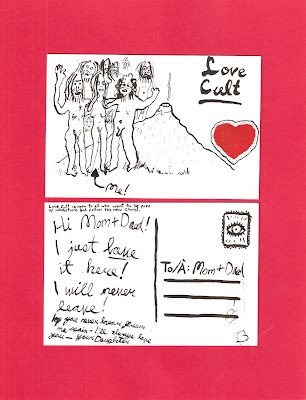 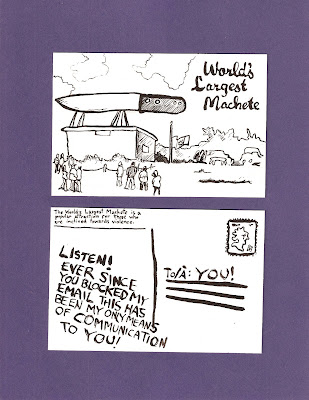 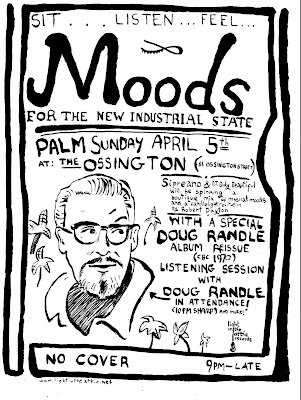 Join us for an evening celebrating this unsung masterpiece (*yes, it's that good!!!) which has just been reissued on CD/iTunes by Seattle-based Light In The Attic Records (http://www.lightintheattic.net/releases/dougrandle/).

DJ bios:
Christened by the son of thunder, Sipreano can rock a party with folk songs. Born in the east and raised in the west, he roams our fair country to uncover its little-known sound heritage. He is a curator of sounds, archival materials, and previously undocumented history, as showcased in Light in the Attic Records' six album Jamaica-Toronto reissue series ("Wayne McGhie & the Sounds of Joy", "Jamaica to Toronto", "Noel Ellis", Jackie Mittoo-"Wishbone", "Summer Records Anthology", and "Earth Roots & Water's "Innocent Youths"), Sixto Rodriguez' "Cold Fact" and "Coming From Reality", The Monks' "Black Monk Time", and most recently, Canadian composer-arranger Doug Randle's "Songs for the New Industrial State (CBC, 1970). MOODS will see Sipreano reach deep into his oddball crates to project serious atmospherics, vibes, and provide an emotional deep feeling soundtrack to the week's final comedown.

D.J. Body Beautiful is Robert Dayton, a personality of living flesh and blood. Robert regularly contributes illustrations, features, obits, and quips to Roctober, Cinema Sewer, Free Drawings, Broken Pencil, and $2 Comes With Mix Tape, as well as the books “Lost In The Grooves: Scram’s Capricious Guide to the Music You Missed” and “Nog A Dod: Prehistoric Canadian Psychedooolia.”
And as an artist he exhibits fully.
Robert is a performer and songwriter with: hot new Toronto band WET DIRT; melodramatic glitter rock act Hallmark; defunct acid downer folk trio Points Gray; legendary longtime lucidly malleable act July Fourth Toilet; modern song and dance duo Canned Hamm. As an actor Robert Dayton starred in the feature “Male Fantasy” , as 'theatre teacher' in a shelved Hillshire Farms commercial, and appears in the upcoming “Leslie, My Name Is Evil”. Due to his candour he has been a Master of Ceremonies as himself and as other bizarre personae. At MOODS he will console you.

NO COVER
Posted by Robert Dayton, Junior at 8:42 AM No comments: